My mamaw was a gardener. It was a real passion for her. She was mostly a flower gardener, and she was an expert with roses. She kept quite a variety of flowers, and she had no small amount of herbs. She was a container and raised bed gardener, and my how green was her thumb. She had the touch, the intuition, the love. It was a joy to see the fruits of her labors. Speaking of fruits, she also had fig trees and plum trees and one lone peach tree. One of the things that delighted me most was how she actually took pleasure in sharing the fruit with birds. She didn’t find it frustrating or maddening when she found eaten fruit decaying on the soft ground beneath her trees. Now she would get angry if she found an otherwise perfect piece with one or two peck-holes in it. That would set her right off, the nerve of those arrogant, thoughtless birds to so selfishly ruin fruit and leave it there to rot. If she could have gotten her hands on one of those little assholes, I don’t believe anyone would have accused her of being the bird lover that she was.

Sigh. I miss her.

This summer, I finally took the plunge and began my first attempt at a raised bed garden – a fall garden. I have a few potted plants on my back deck, but this was to be the real deal. And I had the grand idea of trying veggies. The thing is, I’m not even much of a veggie eater. I can be quite veggie averse, actually. But I finally said, to hell with your analysis paralysis. To hell with your fear of everything. To hell with your apathy. Let’s do this thing.

It started off well. And perhaps I’ll give you a play by play soon. I have some lovely photos of the patch in various stages – from laying out the timbers and filling it with dirt and shit and blocking it out, to my first sprouts and squirrel-dug holes and subsequent attempts to set the taste buds of those cute furry little bastards on fire with cayenne pepper.

Unfortunately, through what I suspect is a combination of things, the garden is about half-dead now. This has been our hottest summer on record. And our driest. And it was impossible to keep the soil watered enough. I also had (have) some sort of bug infestation. I don’t know what they are. I need to figure that shit out. But they’re definitely killing some of the plants that did survive. I’ve also become lazy and ceased daily removal of the copious amounts of pine straw that falls from the tree in my back yard. 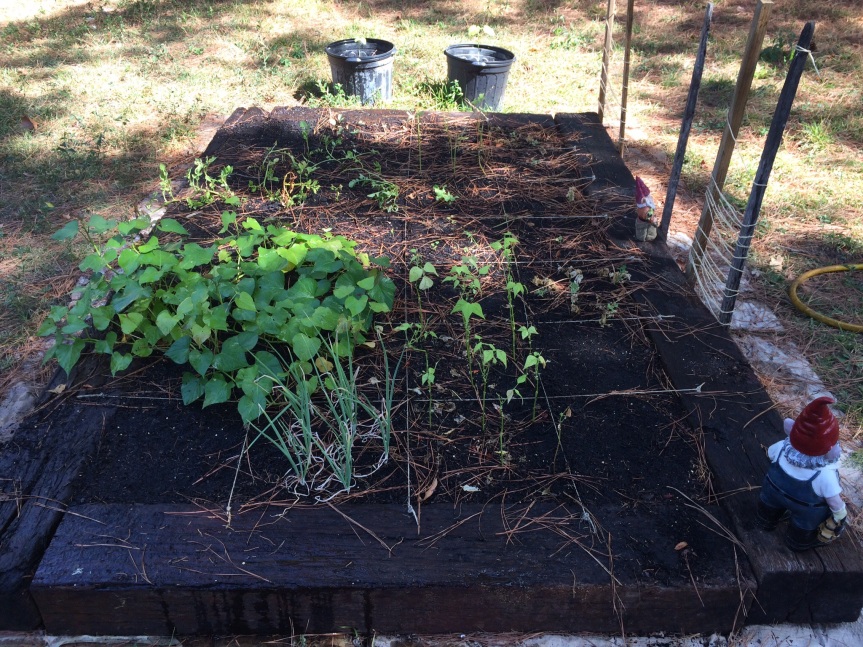 Pitiful, right? The super healthy ivy-looking thingies are sweet potatoes. The pitiful stalks front and center are what’s left of bush green beans. You can also see dead and dying peas, more dead and dying green beans and regular potato vines. Oh. And the green onions, too. They looked amazing, less so now. Are they ready to harvest? Fucked if I know. I’m still learning. Oh and that was my attempt at okra in the pots. Heh.

I lost three pumpkins. Well, one never sprouted. I lost two pumpkins. I lost two butternut squash plants. (I planted four more seeds yesterday evening. It’s probably too late, but I’m gonna try.) Uhm. What else. Oh! I may yet have a few carrots, radishes and maybe even kale and mesclun. The kale and mesclun have been struggling from the start, but they’re finally starting to show signs of growth.

So we’ll see. I’m disappointed but proud of myself for remaining optimistic and not allowing myself to beat myself up. This is new to me. I’m learning. I’ve certainly made mistakes. And there were problems this summer that have stricken every small time gardener I know at work. So I’ll keep at it, see what happens with what’s left. And hell, I’ll start planning a spring garden, too.

Is it too late to plant garlic now? That’s supposed to be easy. And it’s one of the few things I do like. Maybe I can put some in one of the empty squares and just see what happens!

Oh gosh, the gnomes! The gnomes totally deserve their own post. But for now, here’s a sample: 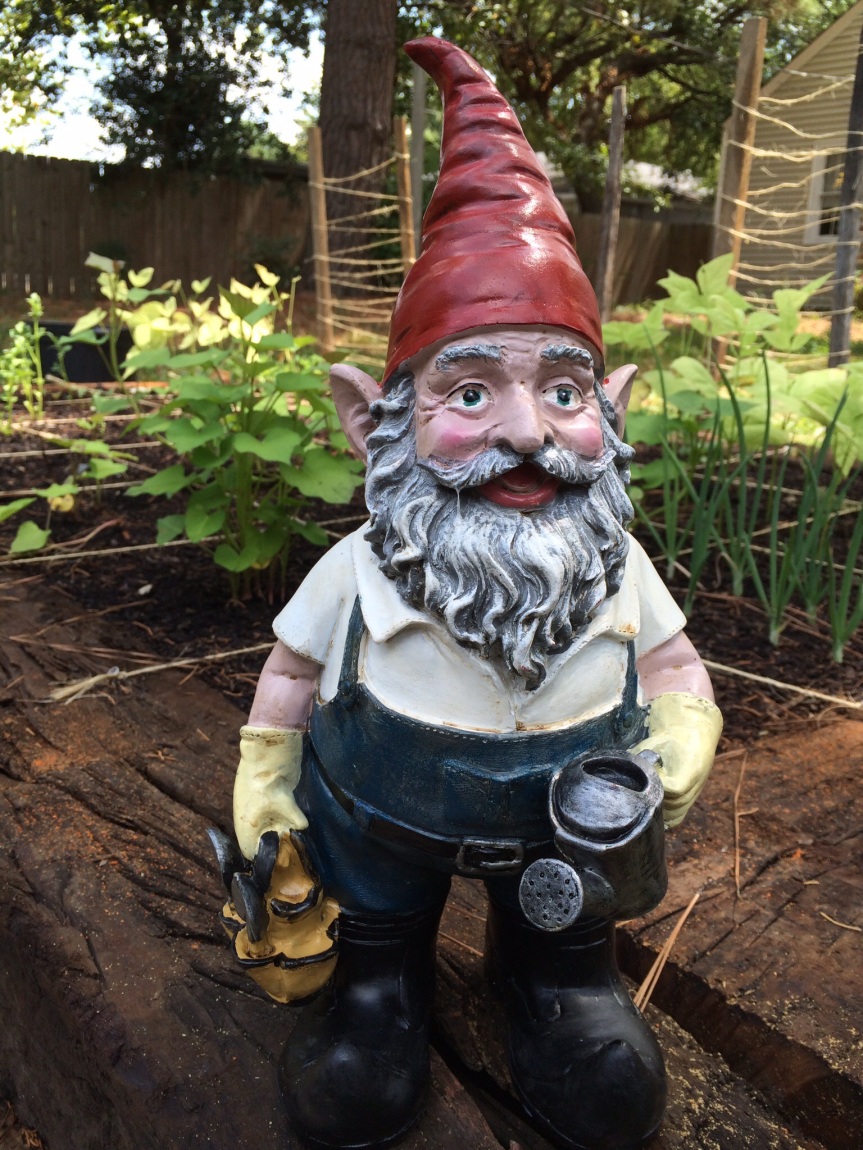 29 thoughts on “The Veggie Patch”