Every now and then, for the past year or so, I’ve gotten an urge to go to the theater for a movie. It’s usually because something comes out that I really wanna see. I’ve ignored the urge, until now.

Friday, I ditched work early and went to see the afternoon matinee showing of Rock the Kasbah. By myself. Yeah, yeah, I know the movie bombed. Like hardcore bombed, only outperforming a shitty take on a shitty old cartoon. But I’ve been interested to see Rock the Kasbah since I first heard about it. Because Bill Murray. What more reason could one possibly need? 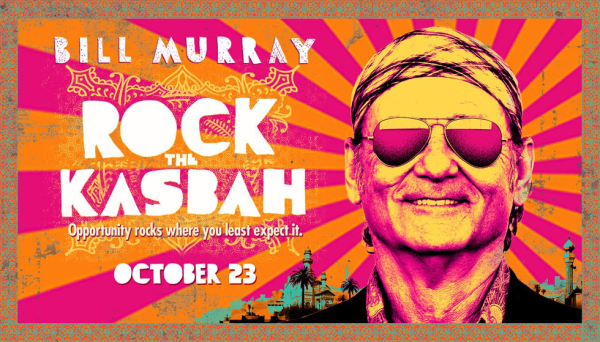 The IMDb synopsis of the film reads: A down-on-his-luck music manager discovers a teenage girl with an extraordinary voice while on a music tour in Afghanistan and takes her to Kabul to compete on the popular television show, Afghan Star.

I usually try to avoid reading IMDb synopses as well as movie trailers; I find them rather spoilery. As I’ve mentioned in the past, I’m highly sensitive to spoilers. And if you are as well – and have any interest in Rock the Kasbah – please refrain from reading any more of this post, because I am not going to avoid spoilers. I’m not a professional reviewer, and I intend to just speak my mind about the movie.

Bill Murray’s character, Richie Lanz, is a washed up music manager. I mean, seriously washed up – both his professional and personal lives are a shambles. The movie opens to Richie listening to a horrendous audition – performed by actress Sarah Baker – as the girl, Maureen, sings her heart out. We learn right away just how hard-up and possibly shady Richie’s character is when he shakes hands with the girl (he doesn’t do paperwork – handshakes are his thing) and accepts a check to represent her, a retainer of sorts.

His only other singer is cover-singer Ronnie (Zooey Deschanel), and she’s pretty fucking terrible at what she does. She can’t sing for shit, and she’s completely aimless when performing on stage – and those performances are limited to one-off bar gigs. Even the drunk audience won’t stick around to listen to her.

Richie meets some USO dude during one of Ronnie’s performances, and this is how they wind up in Afghanistan. For me, things didn’t get interesting until Afghanistan. I like Zooey Deschanel and all, New Girl anyone? But I wasn’t drawn in by the plot until the culture-shocked and wasted Ronnie ditched Richie in Kabul, absconding with his cash and passport.

This is when Richie’s sad and pathetic life turns into a weird and pathetic life. But, ever the optimist, he doesn’t give up. Even though that means becoming a gun runner to drum up some cash, selling faulty American ammo to a Pashtun tribe. And it’s while visiting the Pashtuns that Richie takes a fateful piss in the desert of Afghanistan.

During his (midnight?) piss, he hears the voice of a young girl singing and playing his guitar. Richie’s Pashtun guide and interpreter warns him that it is haram – forbidden by Islamic law – for a Pashtun female to sing or perform music. But Richie and the girl, Salima, are undeterred, though violation of the law could have them both honor-killed. Salima is the daughter of the tribe’s leader, Tariq (Fahim Fazli), and though he forbids it – Salima runs away with Richie to perform on Afghan Star – think an Afghani American Idol.

It is unclear to me whether Richie even needed the money at this point, because of the gun-running, but it looks like this is his chance at redemption. He’s constantly lying to people, saying he repped big stars – such as Madonna – but he’s really never had any success in the entertainment industry. This is his chance, and as you may guess, it has a happy ending. Richie refuses to give up on Salima, even when she is taken back to her village compound. And he is spared death by helping save the village against an internal uprising by Tariq’s rival.

That is the movie in a nutshell, though I didn’t mention Bruce Willis’ strange uber-soldier / mercenary memoir writing / Danielle Steel fan character, Bombay Brian. Bombay Brian had that permanent semi-grin that Willis always seems to wear. But it worked for the character. He was weird, quirky, angry, and emotional. The interactions between Bombay Brian and Richie provided some of the funnier moments.

I also haven’t mentioned Kate Hudson’s character, Merci. Look, I’m not gonna mince words here. I don’t like Kate Hudson. I don’t think she’s a good actress, and I don’t get the appeal other than her body – which I’m not interested in. But I know plenty of people think she’s hot and don’t wanna watch a movie without a “hot chick” parading around in her underwear at some point. Cue Kate Hudson’s “Merci.” She’s the friendly “heart of gold” prostitute that helps Richie save the day, first by “merci/mercy fucking” him and then by harboring Salima while she’s in Kabul for the singing competition. Her fake-ass Texas/southern accent is ridiculous and off-putting. It distracts the hell out of me when I hear put-on southern accents. Just stop it already, Hollywood. Unless you’re poking fun on purpose, stop trying to pull off southern accents. Most of your people can’t do it believably. This is a huge pet peeve for me, FYI. So yeah. If Bill Murray isn’t your thing, but Kate Hudson doing poor mimicry of a drawl in her underwear is your thing, then this movie is still your jam.

The Final Takeaway (plus some things that struck me)

Though this movie was billed as a comedy, I didn’t really laugh much. But it was fun to laugh out loud, uninhibited, when it struck me. Empty theater for the win! Seriously, I was the only one in there…which I loved.

This wasn’t a great comedy. And for roughly the first half of the movie, I was unimpressed and had a hard time relaxing and getting into it. Part of that could have been because I was way way way outside my comfort zone. Being out and about and alone in a theater. It was weird and unsettling but also cool and thrilling. I don’t know how much of that contributed to my initial impressions of the flick. But it’s worth noting.

Once the movie found its purpose in Afghanistan, it felt like the plot flowed better. Though it was still a bit plodding at times, I kind of expected that from a quirky Bill Murray film. I did expect it to be funnier. But, to me, it was more drama than comedy. Maybe a subtle blend into dramedy.

Bill Murray was Bill Murray, but a bit more serious than I’m used to seeing. Bruce Willis was Bruce Willis. Zooey Deschanel was a muted Zooey Deschanel. Kate Hudson was an annoying Kate Hudson. Leem Lubany (Salima) wasn’t very good, really. I found her stoic, never looking afraid or emotional, but she’s young and inexperienced and I’m okay with that. Side note: I kept thinking of a young Jami Gertz, circa The Lost Boys, when I looked at Salima. Is it just me?

I inexplicably began crying while Selima sang on Afghan Star. I couldn’t figure out why, and it made me uncomfortable. Sometimes I start crying like that, during movies or shows, and I don’t know why. I tried to figure this one out, and the closest I could come to a legit reason to weep was the fact that I was watching someone literally risking her life in pursuit of a passion.

There were some overt references to the U.S.’ interference and double-dealings, funding and arming any side of any conflict so long as the cash keeps flowing. The double-timing arms dealers have so much money, they literally throw it at Richie in one scene. And they make some comment that there’s always plenty of cash just there for the taking, so long as the U.S. is in some declared state of war – because war is lucrative. And, of course, tribal infighting results in a gun battle (though super short) at the end of the movie because Afghanistan. Personally, I appreciated the jabs.

Through it all Richie perseveres and Salima sings. Dressed in white, angelic and innocent, singing “Peace Train” to win the competition. It’s beautiful and poetic, and we are shown images of people across Afghanistan glued to television sets or radio, watching and listening to this forbidden performance. Tentative smiles on the faces of little girls, filled to the brim with hope for a brighter future. Awareness and acceptance dawning on the faces of strict and hardened men. The peace train rolls through and touches them, hearts and minds opening to a brighter future of acceptance and equality. It’s beautiful and idealistic and optimistic.

For Bill Murray and for the message of the movie, it was worth watching in spite of its weaker moments and Kate Hudson’s lameass accent and underwear.

Salima quotes Rumi to Richie at a decisive point in the film, and I loved it. I love Rumi, and it’s perfect to finish this post out:

The beauty and simplicity of Rock the Kasbah made it worth the watch. And I think it suffered from marketing misfires – it shouldn’t have been sold as a comedy. It’s more of a touching “come together, never give up, fight against all odds, can’t we all just get along” kinda movie with moments of awkward and subtle hilarity. I liked the film, and I think it’s kinda important.

P.S. I didn’t write about the soundtrack, but I thought this article summed it up succinctly if you’re interested in soundtracks like I am. And for those of you that like trailers, here ya go: