I was going to tell you all about the awesome four day weekend I had this weekend just past.

I was going to tell you about bookstores and masturdating and parks and recreation and old fucks and Buddha by the rhododendron and fishing and fiction.

I can’t do that right now.

Because fuck me, that’s why.

I let the doc put me on geodon. It’s an antipsychotic. Hear me out. I had it on good authority that it could, in fact, help with the mixed episodes I’ve been experiencing a lot lately.

Problem is…turns out I’m allergic to the shit. Severely.

Big ass rash spreading across the back of my neck.

Bubbles on my arm (blister).

Confusion. Randomly stopping myself mid-thought or even mid-sentence.

Fucking. (Yeah right. No such luck.)

Itching. Did I mention this COOKIEMONSTERFORSAKEN ITCHING?! MOTHERFUCK, I ITCH.I’d pay somebody to scratch my itch, but I think that’s called solicitation. 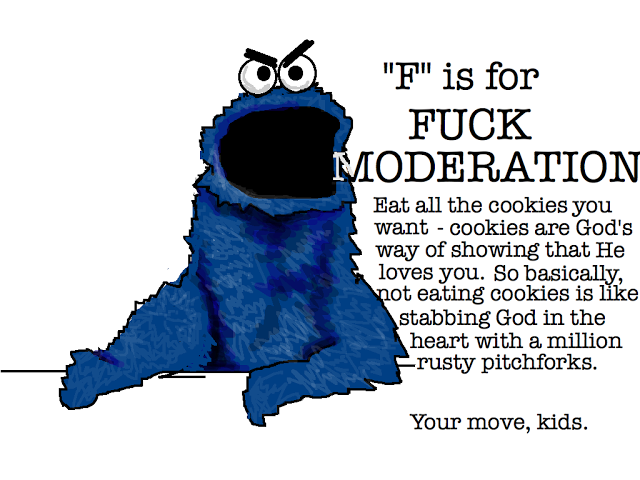 Anyway. The one thing it geodon DIDN’T fuck with, clearly, is my ragingly filthy mind. So there’s that. And also my cookiediction. Me want cookies. Now. (Also. May I borrow someone’s kids so I can “not” teach them this lesson by what is obviously The Real Cookie Monster, please stand up?)

The one thing I DIDN’T get as a side effect was the heart-racing arrhythmia. It’s a damn good thing, because if that box had gotten ticked, he was going to have to admit me. My heart was not only NOT racing, it was lower than he’s ever recorded it. 42. I think? OH MY GOD, MY HEART IS THE MEANING OF LIFE?! I KNEW IT!

Anyturtles. My GP said I met every single other criterion for the Rare and Severe reactions. Yay me!

A man once told me I was rare. Now I know what he meant. RARE AND SEVERE AND FUCKED UP.

Except I don’t kid. You kid. Keep the kids over there. Because I’m MANGRY.

On top of forvomigen, the nausea med he gave me that doesn’t work, he also gave steroids. Lots and lots of steroids that I have to take for six fucking days.

He asked if I had any issue taking short-term steroids to stop my allergic responses and wipe out the rash. I said no, except Hulk. He was mildly puzzled, then laughed when I said YOU know….then I made rage face and said Hulk Angry! Only some of that actually happened. I’ll let you work it out.

So I’m on steroids for a week. And I’m sweating and angry and itching and sore. AND NOT FOR ANY OF THE FUN REASONS.

And I can’t make my brainhole focus on the things I WANTED to write about.

Fucking fuckstick douchecanoe handledick. Oooo handledick. New one. That works a myriad of ways, that one.

Just wanted to say I Miss You.

Just wanted to say Bye Fuckers, Because ME MANGRY.

Oh. And for what it’s worth? Either I was on one of my upswings already, or geodon was actually helping me. Because starting the drug coincided with the start of a major uptick in my moods and mindset. So. Let’s hope it wasn’t the geodon. Because now I’m pissed that I can’t take it anymore. WAAAAAAH. Look at me. Crying like a bitch. MANGRY.

P.S. If that mangry music isn’t your thing, mute it and watch. Because Sully Erna is in Fine Fucking Form here. Shirtless. Shoeless. Perfect jeans. Yum. You know what? I’ll take my steroids with a side of Sully. (Unfortunately, that’s the only good part of the video. The rest of it is wrestling or boxing or nascar or some other lame shit where grownass boys beat each other up for money.) (Hey, don’t start in on me! I told you I’m mangry! It’s in the title! FUCKING STEROIDS. GRAWR.) (But now I’m sleepy and itchy and mangry and hungry and sweaty and ARRGGGHHHHHHH I SAID GOOD DAY!)

P.S. Numberonius Twovicus. How about a preview of last weekend, hm?