Warn me
before you listen to hip hop,
Country one said.

Warn me
before you curse,
Christian one said.

Warn me
before you befriend me,
Aloof one said.

Warn me
before you laugh,
Stoic one said.

Warn me
before you believe,
Atheist one said.

Warn me
before you love me,
Jewish one said.

Warn me
before you trust me,
Brown one said.

Warn me
before you cry,
White one said.

Warn me
before you become,
They said.

Warn me
before you exist,
They said.

Warning you
that I’m done,
I said.

There are things in life that we all expect to get a heads-up on. Things like:

How to get bullied in elementary school. Here are some helpful tips: Thou shalt cut thy little girl’s hair into a little boy’s helmet head. Thou shalt furthermore dress thy little girl in Quaker style dresses and high-water pants. Theyest shall harass the everlovingshit out of thy little girl if thou dost. Thine daughter shalt never forget.

Driving forty miles per hour through a school zone will get you pulled over, even if you don’t turn any toddlers into roadkill. Fortunately for the hypersensitive, your genuine tears of distress and shame will probably get your ticket downgraded to a seat-belt violation.

If you step on a crack, you will not break your mama’s back. No matter how many times you try it. You sick fuck.

Working in Corporate Hell will cause your soul to evaporate. Ask me how I know. (Don’t ask. I’m pretty sure it’s self-explanatory. Besides, my soul has evaporated, so I just won’t answer you.)

Taco Bell rhymes with Taco Hell for a reason. Run away from the border, unless you want to learn the true meaning of explosive.

Never ever glance into an open restroom stall, however inadvertent it may be. You will learn that your COO only dyes the hair on her head to hide the gray. She will giggle and wave. And you will be traumatized for life. For life.

Thou shalt never ever slather cream cheese on chicken or on strawberry cupcakes. Or Stephanies will punch you in the butt cheeks. Both of them.

See? Those all sound like reasonable things to request fair warnings over, yes? I mean, sure, some things will escape us. It’s not my fault I didn’t see the spinach protruding from your teeth before you went into the boss’ office. Therefore, I couldn’t possibly have warned you. Unless you were Queen Bitch and I did that shit on purpose and quietly laughed for a good hour over it. What? That’s purely conjecture, people. You can’t judge me for conjecture. Assholes. Besides, she deserved worse.

I mean, hell. Just ask George R.R. Martin. He’s only been warning us Winter is Coming for a fucking decade. Now there’s a guy who gets it. Unfortunately, not everyone does.

So it would have been Really Fucking Nice to get a fair warning about The Janitor. Let’s call him Creepy Carl, shall we? We shall. He’s in his sixties and a little slow. That’s not a slam; it’s true.

I started my current job about three and a half years ago. Initially I was in a database department, just me and two guys. That suited my personality perfectly. It took a few months for me to warm up to them, but once I finally did I could out-crass both of them. Which  made for some hilarious interchanges. It’s one of the things I miss about that department – the chill factor. So, anyway, I was new at the time, and maybe they didn’t see it coming. Maybe they decided to give Creepy Carl the benefit of a doubt. Maybe they didn’t think he’d hit on me, in particular. Maybe they simply failed to consider the possibility.

Well guess what? All of that is a damn lie. They knew, and they waited for the tales to come. Those fuckers.

Stage 1: Stephanie is new on the job and super duper shy. This is her default nature until she warms up to people. Stephanie is also bashful and friendly. So Stephanie says “good morning” and “hi” to everyone she passes, with a big (non-toothy) smile plastered to her face.

Stage 2: Creepy Carl’s interest is piqued. Stephanie does not realize this, clueless wondertard that she often is.

Stage 3: Creepy Carl begins shouting his greetings to Stephanie, with exaggerated waves…clear across the office building, warehouse, parking lot, youfuckingname it. Stephanie’s growing anxiety with the situation prompts her to blush and wave, then propel herself out of Creepy Carl’s line of sight as quickly as possible. 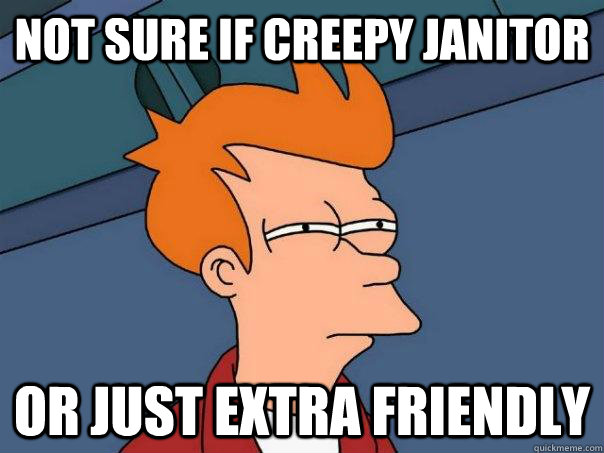 Stage 4: Wondertard, remember? Stephanie, the former smoker, joined the smoking dudes out back to get her nic, thinking this would be a nifty way to get to know people without actually trying to. Which is usually great, because smokers tend to be blue collar, which are generally cool as fuck. Little did Stephanie know, Creepy Carl is a chain smoker. Not once did she have a smoke without finding him there. With increased exposure came increased encounters and conversation. (Look, I wasn’t gonna be rude to the guy. Even if his overt attention-seeking was creeping me out.)

Stage 5: Creepy Carl begins watching for Stephanie to walk through the double-doors from the offices to the warehouse, from where he would then stop whatever he was doing and make a beeline to follow her to the smoking area. Stephanie was most displeased, uncomfortable and beginning to get well and truly freaked out. Wondertard continued engaging him in conversation anyway. Even when it became obvious that Creepy Carl was fishing for interests and relationship status.

I was always as vague as possible in my responses, without being rude. I figure, the guy’s harmless enough. And probably lonely. Whatever, I know that feeling well enough. What could smoke-break conversations hurt? Even if he is starting to stalk me throughout the building, and people are asking questions.

Stage 6: Creepy Carl gets downright fucking scary. One day Creepy Carl pointed at my car in the parking lot and asked, “That yours?” Stephanie thinks, there’s nothing special about it. The damn thing is about sixteen years old. Stylin’ and profilin’ is my game, bitches. Anyway, so wondertard replies, “Yeah, why?” Creepy Carl returns, “Oh, no reason.”

Stage 7: Creepy Carl then attempts to follow Stephanie home after work. No shit, y’all. She twists and turns and evades. She even catches him waving at her in the rear view. She gives the antiquated beast some gas and keeps weaving all through the neighborhood until finally shaking him off her tail. Stephanie pulls into her driveway, heart threatening to pound straight out of her chest, phone in hand ready to dial 911 if he shows up and pulls in behind her.

Stage 8: The next day, Creepy Carl asks Stephanie what neighborhood she lives in. She mumbles some incoherent something, smashes her cigarette out and practically runs back to her office to finally ask the guys what the fuck is up with Creepy Carl. Hipster for Jesus smirks and asks, “You smiled at him, didn’t you?” Stephanie cocks her eyebrow and gives him her famous death-to-you-look, and Hipster for Jesus bursts at the seams with laughter. He nearly got kicked to comb-over school for that one.

So now I’m informed to stay away from him. Now I’m informed Creepy Carl creeps on all the girls, particularly the new ones who haven’t gotten wise to him yet. Creepy Carl is also a known thief who steals from people’s desks and unlocked vehicles. Creepy Carl has been caught at all of this and mildly reprimanded for his stalking and stealing. Hipster for Jesus thought it was funnier this way, to wait until it happened to me. Until I told him about the stalking. He had the decency to wait nearly a full business day to ridicule me about that one.

Stage 9: Wondertard not only continues to smoke out back, in known creep-town, but she also continues to smile at Creepy Carl. But one day, before she could make her quick exit after putting out her cig, Creepy Carl asked Wondertard a question. In front of about a dozen other guys all out there on their smoke-break. Which made it fabulous. Fucking fabulous, let me tell you.

Creepy Carl: “Hey Wondertard, have you ever seen The Nutcracker?”

Wondertard: “Yeah, I used to go on annual field trips to see that when I was in elementary school.”

Wondertard: “Oh I loved it. Mostly because I got away from school for a while. (Wondertard does NOT know how to shut up.) Hated the bus rides, though. Weren’t those the worst?”

Creepy Carl: “I have two tickets, and I would love to take you out to dinner and to The Nutcracker afterward. We could just see where the night goes.”

Wondertard freezes in her tracks, like a doomed deer in headlights just waiting for the impact that will turn a happy, innocent if retarded little deer into road meat.

The dozen or so guys  immediately cease all conversation and phone games, staring in wonder at the scene unfolding.

Wondertard: “I. Uh. I. Uhm. Well. You see. (shifts from foot to foot, heart racing, eyes wide) Well uhm, I mean. Thank you. That’s so kind of you to think of me. I mean. Really sweet. And uhm. (shuffling toward the door now) I mean it’s just…that’s really sweet. I’ll uhm. I gotta get back to work. Thank you. I’ll uhm. I’ll….

Creepy Carl: “Okay, great! Let me know for sure, and I’ll come pick you up. I know where you live.” (He knows where I live! Holy fuck, I’m gonna die!)

Stage 10: Stephanie shakily returns to her office and plops down in her chair, staring at the wall for an interminable amount of time, until finally she cracks: “Hey, Hipster for Jesus?” Yeah? “You’re never gonna believe what just happened…” Yes, fucking Wondertard strikes again. Because you know what happened next? Is what still happens. Stephanie the Wondertard never lives it down. And she also stopped smoking out back, for good, and avoided Creepy Carl like the plague.

I shamefully never gave him an answer. And I do regret that. I just…y’all I’m not the kinda gal that gets asked out. It’s not something I’m used to. It’s not in my realm of experiences, quite frankly. And my anxiety just fucking exploded that day. It didn’t help that he’d tried to follow me home and at some point figured out exactly where I live.

The moral of this story is steer clear of the Creepy Carls in your life, and maybe have a little more sense than to smile and wave back when they grin maniacally and shout at you from across a football field length warehouse. Because that’s too fucking much, y’all. It’s too fucking much!

The second moral of this story is give a girl a head’s up for fuck’s sake! A little fair warning would have been just bloody fucking marvelous!

The third moral of this story is never trust Hipster for Jesus ever ever again. And when he ridicules you, find a way to get him back. I suggest stealing his hair gel and swapping his nut-hugging skinny jeans with jogging pants. Maybe empty his 5-hour energy bottle and fill it with NyQuil. Take that, motherfucker! How ya like me now?

I think we’ve had enough creepy for one post, n’est pas? I shall save Panel Van Paco for another time. Aren’t you just giddy with excitement? Yeah, me neither.